TRIPOLI (Reuters) â€” Libya’s Supreme Court on Tuesday postponed to Jan. 31 its ruling in the final appeal of five Bulgarian nurses and a Palestinian doctor sentenced to death for deliberately infecting children with the HIV virus.
“The court delays the hearing to January 31 to give further time for the defence,” presiding judge Ali Al Alouss said.

Mohammad Al Maghribi, lawyer for the infected victims, said the court was responding to a request from the government for more time to organise its case and to provide new evidence.

The state is involved as a third party. It is contesting the earlier verdict, which says it must compensate the victims because it is responsible for public health.

The six medical staff have been in prison since 1999 and have been sentenced to face a firing squad for intentionally causing an HIV epidemic in a hospital in the Mediterranean port of Benghazi. About 50 of the 426 infected children have died.

“The decision surprised us. There is no such precedent in the judicial history of Libya…The supreme court should have either confirmed the verdict or asked for a retrial,” said Othman Al Byzanti, the medical staff’s chief defence lawyer.

Angered by the delay, victims’ relatives who had been waiting outside the court pelted police with stones and prevented European diplomats attending the trial from leaving through the back door of the courthouse.

“Death penalty for the killers of the children,” the protesters chanted. Two policemen were injured in the protest.

Bulgaria and its allies, the European Union and the United States, have condemned the earlier verdicts because they are based on confessions nurses say were extracted by torture.

They also say the court ignored AIDS expert testimonies saying the epidemic started before the nurses arrived at the hospital and was probably caused by poor hygiene.

Bulgarian President Georgi Parvanov said he hoped the delay would produce a solution, even if the court had failed to acknowledge the accused were innocent and acquit them.

“In that sense the head of the state expresses hope this delay will be the last and a fair solution will be achieved,” a statement from Parvanov’s office said.

Human Rights Watch said the court should consider the claims of the defendants that they had confessed after enduring torture that included beatings, electric shocks and sexual assault.

“The Libyan supreme court should take these facts into account and reject the death sentences,” she said in a statement.

“The plight of these innocent children is a tragedy. But their suffering should not impede justice or lead to more abuse.” In June, a Libyan court cleared nine policemen and a physician of torturing the Bulgarian nurses to get confessions.

A Western diplomat in Tripoli said the postponement should give time for all sides to work on a negotiated solution.

Libya has suggested the death sentences could be commuted if Bulgaria compensates the families. Political analysts say Tripoli could face unrest if the defendants are freed.

“I swear before God that I will be a soldier for (Al Qaeda leader Osama) Ben Laden and kidnap any Bulgarian who works here to avenge the infection of my boy,” shouted Ahmed Attarhouni to police and international media covering the trial.

“There is no supreme court in the world that postpones a hearing three times,” she said. “The judge is an agent of the US, Bulgarian and Libyan governments. I’m asking Al Qaeda and (Abu Mussab) Al Zarqawi to take justice for my daughter.” Libyan police Colonel Joumaa El Machri, who led the investigation into the case and was among those cleared of torture, defended the verdict against the Bulgarians.

“I’m sure the nurses are criminals and we are ready for an international investigation to prove they are 100 per cent guilty,” he told Reuters at the courthouse. 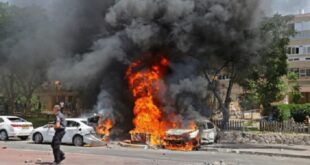 At Iran’s Press TV, its propaganda network focused on Western audiences in English, has wall-to-wall …