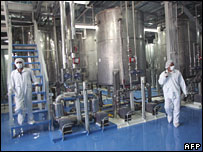 Iran’s government has denied Israeli accusations that it played a role in Hezbollah’s seizure of two Israeli soldiers last week – a move that sparked Israeli strikes on Lebanon.

Although Iran helped found the Lebanese-based Hezbollah in 1982, Iranian officials say their country gives the group only spiritual and political support, not financial aid, training or weapons.

Some observers say no matter what kind of ties Iran has to Hezbollah, the conflict could help take the world’s focus off Iran’s disputed nuclear programme.

It could give the country a chance to win greater support in the Muslim and Arab world for its message that Israel represents a more immediate threat than Iran in the region.

“It can attract the attention of the Muslim world towards Israeli savage actions in this part of the Middle East so that Iran’s nuclear programme can be sidelined, at least for some time, and it can buy some time for Iran to handle its nuclear programme in a better way,” said Hossein Hafezian, an Iranian expert on Middle Eastern studies.

He added that Tehran could also use the current clash in Lebanon to show Israel and the United States that it had the power to exert pressure on America’s closest ally in the region, Israel.

But Ahmad Khoshbin, a member of the National Security and Foreign Affairs Commission in Iran’s parliament, denied that his country fuelled the current conflict or that it had anything to gain from it.

“It’s not at all to the benefit of Iran, and it has nothing to do with the nuclear issue,” he said.

“The UN and the UN Security Council are under the control of Israel and the US, so Iran’s nuclear issue would be on the agenda whether or not the fighting in Lebanon had begun.”

“The harsh reactions by the Israelis have embarrassed whoever has designed the kidnapping because the price that all Lebanese are paying is very heavy,” he said.

“So it may backfire both for Hezbollah and its foreign sponsors.”

Some observers say not only could Hezbollah and its main backers, Syria and Iran, lose prestige by being accused of sparking the conflict, but Israel could also use the opportunity to strike at either country.

Iranian analyst Rahman Ghahremanpour said the continuation of the conflict was not in Iran’s interest.

“I think Iranian power elites believe one of the aims of Israel is to engage Iran in a type of clash, and then use it to justify attacking Iranian nuclear facilities,” he said.

“The turning point would be targeting the largest Israeli city,” he added.

“If Hezbollah targets Tel Aviv, it’s possible there would be a type of clash between Iran and Israel, but I think Hezbollah knows this so it tries not to attack Tel Aviv.”

The possibility of the spread of war concerns some Iranians, even though Israel’s Deputy Prime Minister Shimon Peres said on Wednesday his country did not intend to attack either Syria or Iran.

Some Iranians say they sympathise with the Lebanese, but they worry that Iran’s ties to Hezbollah could lead to a similar Israeli attack on their country.

“This is a fear not just for me but in everyone’s life,” said Ramin Bayat, a 22-year-old university student. “This is some kind of dread. I think it’s going to make people’s lives scary.”

Other Iranians, however, say Israel would not dare attack their country.

They say if it does, they will be ready to fight.

“Israel’s goal is to take the war in this direction,” said Hojjatollah Abbas Alizadeh, who was taking part in a pro-Hezbollah rally on Tuesday in Tehran.

“However, the likelihood of war coming here is very small because the Hezbollah will crush the Israelis.”

Tehran, however, could also be drawn into a military conflict if Israel attacks Iran’s ally, Syria.

The defence ministers of Iran and Syria signed an agreement for military co-operation last month, although they declined to give specifics about what it involved.

Iran’s president has also warned of a “fierce response” if Israel attacks Syria.

But Mr Khoshbin said Syria could defend itself against an Israeli attack.

“I doubt the war will spread to Syria,” he said. “But if it does, Syria can certainly respond, and it has no need for Iranian help.”

Mr Ghahremanpour said many Middle Eastern countries preferred a “proxy clash” through Hezbollah instead of a direct confrontation with Israel.

“I think if Syria were attacked, Iran would support it rhetorically but not practically,” he said.

“But Israel is not determined to have a clash with Syria because it is already engaged in Gaza and southern Lebanon.”

On the other hand, Iran could still be harmed if Israel dramatically damages Hezbollah, therefore weakening one of Iran’s means of deterring a possible military strike against it over its nuclear programme, according to another analyst who did not want to be identified.

Tehran says its nuclear activities are purely peaceful but has warned the US that it can use its leverage in the region to create problems if attacked.

“By losing Hezbollah for any possible encounter with the US and Israel, the positions of Iranian leaders will become weaker in the nuclear negotiations,” he said.