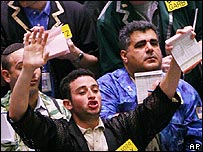 Prices rebounded slightly having fallen back from near record highs on Monday amid hopes Israel may scale back its fighting against Lebanese guerrillas.

London’s Brent crude rose 17 cents to $76.09 a barrel on Tuesday, Earlier it had dropped back after touching a record $78.18 on Monday.

Prices had fallen after reports that Israel could end its Lebanon offensive within days and assurances from oil producers’ group Opec that there was plenty of supply.

Although neither Lebanon nor Israel are major oil producers, some investors fear the conflict could quickly destabilise the wider Middle East region, one of the world’s most important oil centres.

Particular concern surrounds Iran, the second biggest contributor of the Opec producers group which offers financial backing to Hezbollah, with worries it may be drawn into fighting.

The Japanese market fell 2.75% in Tuesday trading as the market played catch up over the crisis in the Middle East having been closed for a public holiday on Monday.

The major European markets were all trading down by about 0.5%.