SARAJEVO, Bosnia and Herzegovina (BiH) — People across BiH headed for the polls on Sunday (1 October) for the country’s fifth general election since splitting from the former Yugoslavia. Polls showed that three parties — the opposition Social Democrats, the centrist Party for Bosnia and Herzegovina, and the Muslim nationalist Party of Democratic Action — enjoyed more or less the same levels of support in the BiH Federation.

In Republika Srpska, the Serb Democratic Party, which was founded by Radovan Karadzic in the 1990s, appeared to be losing ground, paving the way for moderates to dominate the entity’s politics. Preliminary results are expected around midnight.

BELGRADE, Serbia — Parliament voted unanimously on Saturday (30 September) to adopt a new constitution that describes Kosovo as an integral part of Serbia, with substantial autonomy. The new constitution also provides a form of self-rule for Vojvodina. Prime Minister Vojislav Kostunica told deputies the law would not be changed regardless of the outcome of UN-mediated talks on the future status of Kosovo. The constitution must be approved via a national referendum on 28-29 October. Protestors demonstrated outside parliament, insisting the new constitution is anti-democratic and could harm Serbia’s European interests.

In other news, a new special brigade of the Serbian Army was officially inaugurated on Friday. It was established by merging the army’s special units and will be based in Pancevo and Nis.

HELSINKI, Finland — UN tribunal chief prosecutor Carla del Ponte warned on Friday (29 September) that top war crimes fugitives Radovan Karadzic and Ratko Mladic might never face justice, if the UN does not extend the tribunal’s mandate beyond 2008. The same day, she met with EU Enlargement Commissioner Olli Rehn in Helsinki. Rehn said afterwards that there has been no sign of improved Serbian co-operation with the tribunal, and thus there is no basis for resuming Stabilisation and Association Agreement talks with Belgrade.

ANKARA, Turkey — Economy Minister and chief negotiator with the EU Ali Babacan welcomed on Friday (29 September) word of a new initiative by the Finnish EU Presidency, intended to resolve the deadlock over the Cyprus issue. The plan aims to lift the current economic sanctions against the Turkish Cypriots in exchange for Ankara opening its ports and seaports to Cypriot traffic.

Babacan, who met with Finnish Foreign Minister Erkki Tuomioja in Helsinki, reiterated that Turkey would open its ports and harbours to Greek Cypriot traffic as soon as the economic isolation of the northern Turkish-occupied part of the island is lifted, as pledged by the EU.

ANKARA, Turkey â€“ In a statement, the Kurdistan Workers’ Party (PKK) announced what it described as a unilateral ceasefire as of Sunday (1 October). However, it said the duration of the ceasefire would depend on future contacts between the PKK and the authorities in Ankara. It also left the door open for using arms in retaliation for activities by the Turkish military. Earlier in the week, Prime Minister Recep Tayyip Erdogan refused a PKK call for both sides to observe a ceasefire.

SOFIA, Bulgaria — As expected, the cabinet endorsed on Friday (29 September) the deployment of the 160-crew military frigate “Drazki” to the UN Force in Lebanon (UNIFIL). Parliament must give the deployment final approval.

Separately Friday, Albanian Defence Minister Fatmir Mediu announced that his government was considering whether to send a contingent to UNIFIL. Media reports suggest the Albanians would serve under Italian command.

SOFIA, Bulgaria — Parliamentary Speaker Georgi Pirinski announced on Friday (29 September) that one of the Bulgarian observers at the European Parliament (EP), Dimitar Stoyanov from the ultranationalist Attack coalition, might be withdrawn for allegedly insulting Hungarian Roma EP deputy, Livia Jaroka. The Bulgarian parliament’s ethics commission plans to review the case Monday, ahead of a vote by the full legislature later in the week. Attack says the matter is an attempt to discredit the party ahead of the 22 October presidential election.

BUCHAREST, Romania — The National Liberal Party (PNL), one of the senior partners in Romania’s ruling coalition, said on Sunday (1 October) that it is expelling two deputies, Raluca Turcan and Cristian Boureanu. They had been openly critical of the recent expulsions of other three senior PNL members, Theodor Stolojan, Valeriu Stoika and Mona Musca.

ZAGREB, Croatia — Controversial businessman Hrvoje Petrac pleaded not guilty to charges of involvement in the 2004 abduction of a teenager for ransom, as a retrial in the case began before the Zagreb County Court on Friday (29 September). He and his co-defendants denied claims by prosecutors that the ring planned to kidnap more children of wealthy parents. An appeals court had overturned earlier convictions on technical grounds. Petrac, a former aide to Croatian war crimes indictee Ante Gotovina, had been on the run for years but was extradited from Greece in August.
Britain to abolish visas for Romanian citizens before EU entry
01/10/2006

BUCHAREST, Romania — British Ambassador to Bucharest Robin Barnett said on Saturday (30 September) that British visa requirements for Romanian citizens would be abolished before the country’s 1 January EU accession. In a statement for the Rompres news agency, Barnett said London had not yet decided on the exact timing. (Rompres – 30/09/06)

PALIC, Serbia — An OSCE-run training course for police chiefs from eight Southeast European states — Albania, Bosnia and Herzegovina, Bulgaria, Croatia, Macedonia, Montenegro, Romania and Serbia — was held in the Serbian town of Palic on 25-29 September. The initiative was aimed at strengthening management and leadership capacities of senior police staff and boosting collaboration in fighting organised crime. 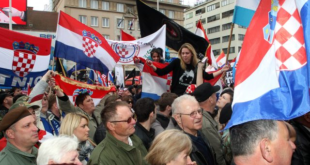