Mine blast in Ukraine, 50+ injured

Rescuers have finished evacuating a coal pit in the Ukrainian city of Donetsk following a blast early on Saturday. It’s the second methane explosion at the mine in as many weeks.The evacuation is over at the Zasyadko mine. 52 miners needed medical help. Eight people have been hospitalised, five of them are in intensive care. The rest are being checked by doctors who will decide whether they need any special treatment. At the time of the explosion 385 miners were in the mine, 63 of them in the shaft where the blast occurred,â€ Igor Krol from Ukrainian Emergencies Ministry commented.

On November 18, an explosion claimed the lives of 101 miners.

Then the investigators named a breach of the safety regulations among the possible causes.

After Kazakhstan Crisis, China Will Reassess Its Influence in Central Asia 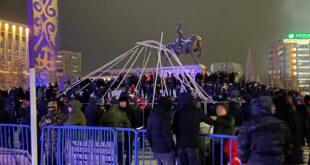 When a Russian-led military force intervened earlier this month, it did more than help Kazakh …