Turkey eyes law to get PKK members to quit: report

Ankara blames the PKK for almost 40,000 deaths since the start of its campaign in 1984 and in recent months has massed tens of thousands of troops in the southeast for possible cross-border strikes against rebels based in northern Iraq.

Turkish law already allows members of the PKK who have not been involved in attacks to avoid punishment, but only if they hand themselves in and inform on the group.

“Now we can develop it further. Before we passed a law but the number of people who benefited from it was not to the degree that we wanted,” Erdogan was quoted as saying by top-selling daily Hurriyet. Other newspapers also carried the report.

“With a new initiative we can minimize the number of people going up into the mountains (joining the PKK), we can eradicate that. Then we can encourage people to come down from the mountains,” Erdogan said.

Erdogan said the government was working on the plan with the powerful armed forces and said it would not negotiate with the PKK. He did not give details.

“We’re not negotiating with anyone. We will say ‘this is the law, come hand yourself in’,” he said.

Ankara, like the United States and European Union, considers the PKK a terrorist organization.

Erdogan’s AK Party, which has invested heavily in development in the impoverished, mainly Kurdish southeast, made sweeping gains in the region in July’s parliamentary election, taking support away from the pro-Kurdish Democratic Society Party.

But elsewhere in Turkey, an escalation of guerrilla violence in recent months has stirred nationalist sentiment and Erdogan could face fierce opposition to any initiative perceived as an amnesty.

How involved was Iran in the Houthi attack on the UAE? 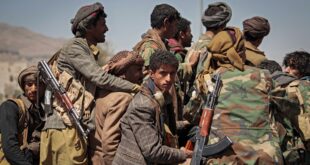 As the Houthis expand their regional aggression, will the US double down on a failing strategy?

The State Department announced, on Jan. 19, that Tim Lenderking, the U.S. special envoy for …