Mobs stormed the U.S. embassy on Thursday and set it on fire and other diplomatic missions were stoned after a mostly peaceful mass protests against the former Serbian province’s declaration of independence.

The attacks, which Serb officials blamed on “isolated vandals”, were beamed across the world and condemned by the United Nations.

“The U.S. is the major culprit for all troubles since Feb 17,” Slobodan Samardzic told the state news agency Tanjug, referring to the date when Serbia’s Albanian-majority southern province declared independence.

“The root of violence is the violation of international law. The Serbian government will continue to call on the U.S. to take responsibility for violating international law and taking away a piece of territory from Serbia,” he said.

The State Department has said family members and non-core personnel from the Belgrade mission will be relocated until security improves.

The ambassador and essential staff will stay, and the mission will re-open early next week, after repairs to the facade and parts of the embassy damaged by the fire.

A charred body that was found inside the building after police moved in to disperse the rioters has not been officially identified.

The Serbian daily Blic on Saturday reported the victim was a 21-year old student, originally from Kosovo, who moved to Serbia in 1999, when NATO expelled Serb forces from the province to stop the mass killing of civilians in a counter-insurgency war.

The province, seen as Serbia’s religious heartland, has been under U.N. supervision since then. The swift recognition of its declaration of independence by the U.S. and major European countries has triggered a call to boycott products and businesses of the countries that recognize the territory.

One of the several round-robin emails urged Serbs to close their accounts and stop transacting via foreign banks because “any dinar going through those channels may be used to finance donor conferences” for the province. 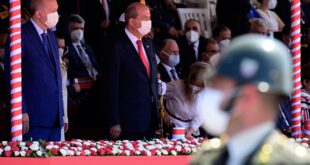