TEHRAN (FNA)- Iran and Turkey take one step further toward concluding a deal on development of Iran’s three South Pars gas fields, as delegations from the two neighbors discuss investment models during the week.

Turkish Petroleum Corporation (TPAO) will look for partners once a final deal is reached on the $3-4 billion project.

The Iranian officials arrived in Ankara on Monday and held talks with officials from the Turkish Petroleum Corporation (TPAO) and state owned Turkish Pipeline Company (BOTA?) for three days. The Iranian delegation submitted its report to the Turkish Energy Ministry and returned home yesterday.

Turkish Energy Minister Hilmi Guler signed a memorandum of understanding with Iran’s former Oil Minister Kazem Vaziri Hamaneh on July 13, 2007 allowing TPAO to produce 20 billion cubic meters of natural gas in phases 22, 23 and 24 of Iran’s South Pars gas field. The plans also include an agreement to use Iran as a transit country for Turkmenistan’s natural gas.

The delegations discussed the investment model for TPAO, a high-level Turkish energy ministry official said. “TPAO and Iran are still elaborating on the investment model. We are close to reaching a conclusion. Technical teams will convene in Ankara or Tehran in a month,” he said. The official said there is no reason not to sign the contract with Iran this year.

Turkey also declared in August last year that it will help build a hydroelectric plant in Iran and will purchase three to six billion kilowatt-hours of electricity from Iran to cover its shortages.

The TPAO will look for partners following finalization of the deal, as investment costs are expected to reach $3-4 billion, officials said. Iran will pay cash or natural gas in exchange for TPAO’s production in the three fields. The annual gas flow expected is 20 billion cubic meters, which amounts to two-thirds of Turkey’s gas needs. Gas will be transferred to Turkey through a pipeline to be built by BOTA? and Iran’s concerned companies. Some of this gas will be used in Turkey, while the rest will be delivered to Europe, officials said.

Turkey acquires around 65 percent of its natural gas from Russia and is looking for ways to divert its sources. Iran is the second-largest gas supplier to Turkey.

Is the ‘hardliner’ talking point about Iran’s Raisi a whitewash? 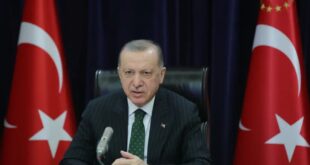 Iran has witnessed dozens of mysterious fires and explosions across the country since mid-2020, many …