Egypt has opened its border crossing with the Gaza Strip at Rafah for two days, allowing hundreds of Palestinians to cross into and out of the territory.

Palestinian officials said the move was a goodwill gesture before the beginning of the Muslim holy month of Ramadan.

Only those requiring medical treatment, along with holders of foreign residency permits, will be permitted to leave.

The Rafah crossing has been closed for most of the period since Hamas seized control of the Gaza Strip in June 2007.

Israel has also sealed its border crossings with the coastal territory, allowing in only humanitarian aid and basic supplies.

In June, Hamas and Israel agreed a truce aimed at halting Palestinian rocket attacks on Israeli territory in return for Israel’s lifting of its blockade.

Under a November 2005 deal, Israel can control access to the European officials who monitor Rafah. In th 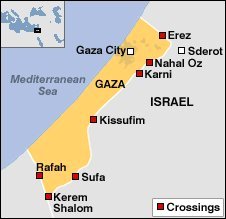 is way Israel has kept the crossing mainly closed since 2007.

Hamas blew up large sections of the Egypt-Gaza border fence in January, enabling thousands of Gazans to temporarily stock up on goods they had been deprived of by the restri