UN ‘has run out of Gaza food aid’ 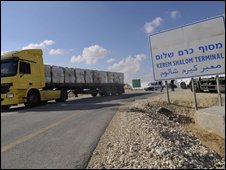 The UN has no more food to distribute in the Gaza Strip, the head of relief efforts in the area has warned.

John Ging said handouts for 750,000 Gazans would have to be suspended until Saturday at the earliest, and called Gaza’s economic situation “a disaster”.

It has prevented the transfer of all goods into Gaza for nearly a week, blaming continuing rocket attacks by Palestinian militants.

The United Nations Relief and Works Agency (Unrwa) distributes emergency aid to about half of Gaza’s 1.5m population.

“We have run out [of food aid] this evening,” said Mr Ging, Unrwa’s senior official in Gaza.

“Unless the crossing points open… we won’t be able to get that food into Gaza,” he told Reuters news agency.

Also on Thursday, Israel refused permission for a group of senior European diplomats to visit the coastal enclave.

It has also prevented journalists, including those from the BBC, from entering the territory.

Limited supplies of fuel were sent over on Tuesday after Gaza’s only power plant ran out of diesel.

Militants say the mortar and rocket fire is their response to what they say is Israeli aggression against Gaza.

Israeli government spokesman Mark Regev insisted any improvement would be dependent on the Hamas movement which runs the Gaza Strip.

“There’s been a combat situation and it’s very difficult to have unhindered functioning of the border crossings in a situation where shooting is going on,” he said.

On Wednesday, Israeli troops killed four Palestinian militants from the Hamas movement, which has controlled Gaza since it wrested power from the Fatah-dominated Palestinian Authority in June 2007.

Witnesses said fighting broke out on the Gaza border after Israeli armoured vehicles crossed into the territory near Khan Younis.

The army said its soldiers were trying to stop militants plant a bomb near the security fence surrounding the strip.

The Gaza power plant provides most of the electricity used in Gaza City; Israel supplies most of the rest of the territory’s energy needs, but the system is liable to become overloaded and blackouts are common.

Israel occupied Gaza in 1967, but pulled military forces and Jewish settlers out in the summer of 2005.

Access to the territory, which is home to about 1.5m Palestinians, remains under the control of Israel’s military, as does its airspace and territorial waters.

Egypt controls the southern entrance to Gaza at Rafah, and goes along with the policy of isolating the Hamas movement, which Israel and its allies brand a terrorist group.

The current round of clashes and rocket fire began on 5 November when Israeli troops entered Gaza to destroy what Israel said was a tunnel dug by militants to abduct its troops.

One militant died in the gunfight, and a subsequent Israeli air strike on Hamas positions in southern Gaza killed at least five fighters.

Hamas responded with a barrage of rockets fired into Israel. There has been intermittent rocket fire since, causing no Israeli casualties.

A truce between the two sides declared on 19 June had largely held. Both sides have accused the other of violating the truce, but maintain that they remain committed to it.