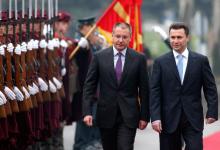 Bulgaria is not preventing an association of Macedonians in Bulgaria from registering as a political party but they instead are refusing to do so, Bulgaria’s Prime Minister claims.

Sergey Stanishev was referring to the OMO Ilinden Pirin organisation and made the comments during an official visit to Macedonia in which he held a joint press conference with Macedonian counterpart Nikola Gruevski on Monday.

“Bulgaria fulfilled the rulings of the European Human Rights Court. I have an impression that the leaders of OMO Ilinden Pirin simply do not want to register and do not want to meet the condition for it in order to be in the centre of media attention. Because if they do, they would not be interesting any more,” Stanishev claimed.

This is “shameless claim”, the president of OMO Ilinden Pirin, Stojko Stojkov told local Kanal 5 TV on late Monday. Bulgaria constantly changes conditions for registration and their last demand to us is to publicly cancel out the existence of the Macedonian minority in Bulgaria.

In 2005 the European Court of Human Rights ruled that the ban on OMO Ilinden Pirin was a violation of the European Convention on Human Rights. Following the judgment the organisation tried unsuccessfully to re-register the party in 2006 and 2007.

Since the court has no mechanism to enforce Bulgaria to comply, the organisation is complaining that they are still banned from registration.

So far there is no official data on the number of Macedonians living in Bulgaria.

The two countries have different views on history, celebrating same persons as their national heroes. The first are claiming they are of ethnic Macedonian origin and the others that they are Bulgarians.

Despite this, Bulgaria was first to recognise Macedonia’s statehood after it declared independence from former socialist Yugoslavia in 1991 but has officially not recognised the existence of the Macedonian nation and language as separate from Bulgarian.