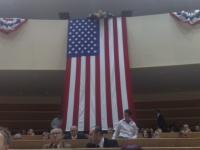 The West ended the war in the region, now it’s time to secure the peace.

Bosnia and Kosovo have largely disappeared from public view. Washington and Brussels are hoping the promise of European Union accession will ultimately triumph over remaining ethnic tensions in the region. Would that this were so.

Rather, a divided EU is allowing the Balkans to slide toward greater instability, while the U.S. remains mostly on the sidelines. America’s massive investment in the region in the 1990s may go the way of the subprime market.

Bosnia is a nonfunctioning state living under the constant threat its autonomous Serb region to hold a referendum on independence. The Bosnian Muslim prime minister wants to throw out the Dayton agreement that concluded the Bosnia war in 1995, end Serb autonomy and form a unitary state. Western oversight has failed to ease the tensions among ethnic groups. The wounds of war are still raw.

Most politically damaging to the new state is the largely Serb-inhabited northern part of Kosovo, which continues to be run from Belgrade without vigorous objections from the EU or the U.S. This in effect partitions the fragile Kosovo state and cements continued ethnic tensions.

The root cause for most of this instability still rests in Belgrade. Although its new government is eager to become part of the EU, it insists on governing Serbs in Kosovo and is doing everything possible to reverse its independence.

In Bosnia, Belgrade is working with Moscow to strengthen Serb autonomy with political and particularly economic support. Despite its constant assurance to seek a European future, Serbia remains mired in the past, failing to turn indicted war criminal Ratko Mladic over to the Hague Tribunal.

The EU, which believes that Serbia is the center of the Balkans, is doing little to pull it out of the muck. All member states seem to subscribe to the assumption that, under pro-EU President Boris Tadic, Serbia must be permitted to pursue the process of EU accession — irrespective of its policies toward Kosovo and Bosnia and the fact that Serbia does not meet EU requirements for political and economic reform.

Brussels fears that any failure to give complete support to Mr. Tadic would bring extreme nationalists to power. By and large the U.S. has gone along with the EU. Brussels and Washington seem to believe that time and money eventually will solve the problems. The Serbian government has come to believe — or, for domestic purposes, professes to believe — that it has outmaneuvered the EU into promising membership without resolving territorial differences.

If the downward trend in the Balkans is going to be reversed, the EU and the U.S. will have to show stiffer resolve and greater clarity. To prevent the return of ethnic violence in Bosnia, the High Representative, who administers the implementation of the Dayton agreements, needs to be reinvigorated with visible backing from the EU, including maintaining its peacekeeping forces. The High Representative should revive constitutional reforms that three years ago came within two votes of approval in the Bosnian parliament.

Given Moscow’s opposition, it is not possible to get U.N. Security Council agreement on Kosovo. But the U.S. and the EU, whose new Kosovo mission now operates in the north, can begin the process of reintegrating the Serb-controlled portions of the newly independent state by ensuring that law and order there is not administered by Belgrade. So far, cooler heads in Kosovo have prevailed, preventing extremists from trying to seize the north by violence. But the West must reasonably quickly allow Kosovo to govern its entire territory if peace is to prevail.

Serbia, Bosnia and Kosovo all belong in the EU. Once they became members, borders will become less relevant. But the EU should make it clear that membership is not possible with the Kosovo issue unresolved or Bosnia still at risk.

None of this will be easy for the EU as it needs to find agreement among 27 member states. The U.S. has many other problems far more vital to its security than the Balkans. But acting together, Brussels and Washington managed to end the Balkans wars of the 1990s. It is now time they work together to bring lasting peace to the region.

Mr. Abramowitz is a senior fellow at the Century Foundation. Mr. Serwer is a vice president at the United States Institute of Peace. This article was published in the Wall Street Journal.