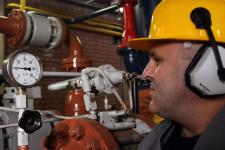 Bulgaria’s Minister of Energy and Economy Petar Dimitrov said on Wednesday that the austerity measures in natural gas consumption would be lifted after Russia and the Ukraine resolved their gas pricing dispute. .

“We have gas, the crisis is over”, the Minister declared explaining all technical conditions to do away with the restrictions were available as Russian gas had started to flow in full-speed.

Dimitrov said it would take the heating utility companies a while to switch back from oil to gas, and some of them were actually planning to continue using oil as it was more profitable for them.

The Minister announced that Bulgarian companies had incurred direct losses of over 180 million lev because of the gas shortage crisis. However, Bulgaria could sue for compensations only with the three Gazprom subsidiaries that are its suppliers; it could not have any claims against the Ukraine because the two countries had no natural gas transit contracts.

The Bulgarian Ministry of Energy and Economy is not going to disband its emergency staff for dealing with the gas crisis because it wanted to have its officials analyze the situation in detail, and to figure out what mistakes that were made in securing alternative energy sources.