Belarus to Export Dairy Products to Iran in 2009 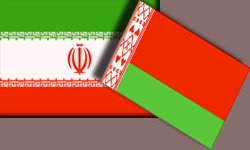 TEHRAN (FNA)- In 2009, the Belarusian food producers intend to start the export of dairy products to Iran and Moldova.

At present, Belarusian specialists are discussing the terms and prospects of the cooperation with the Iranian and Moldovan sides, BelTA reported.

Representatives of the Belarusian Ministry of Agriculture and Food are discussing the possibilities to boost the export of Belarusian foodstuffs to other countries as well. This year, the Lepel Dairy Plant and Bellakt Company (Volkovysk) will start to export fat-free dried milk to Venezuela. The total export of the dried milk to Venezuela will make up 7,000 tons. Belarus will start the supplies of butter to Ukraine. All in all, in 2009 the Belarusian food producers intend to export 2.8 million tons of dried milk and dairy products.

The Russian Federation is the main trade partner of the Belarusian companies which produce foodstuffs. The Belarusian food companies sold their products in 66 regions of Russia. Over the eleven months of 2008, the export of Belarusian foodstuffs to the CIS member countries (except Russia) made up $60.6 million, or 45.6% up as against the same period of 2007. All in all, the Belarusian food producers supplied goods to 39 countries. In the period under review, they posted a surplus in foreign trade at the amount of $547.8 million.