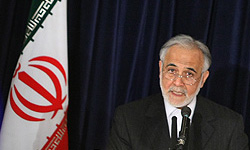 “After 30 years, we can see the practical and scientific effects of the Islamic Revolution in all dimensions and areas in Iran today and despite West’s efforts in using all tools and instruments to fight against the Islamic system, the plots of the world arrogance have been defused and the system of hegemony has reached its end, “Parviz Davoudi said at the inaugural session of a congress dubbed ‘Innovation and 30-Year-Long Achievements of Iran’s Medical Sciences’ in Tehran.

Referring to the social and economic crises in the western countries, he said that the West is experiencing collapse.

The Iranian first vice-president also referred to the falling stock indices and recession in the West, and said the events that happened on the political, international, social and economic scenes in the West show that the imperialist system is collapsing.

The global economic crisis tightened its grip on the United States which posted its worst contraction in 26 years on Friday as grim jobs and earnings data emerged from Japan and Europe.

Amid the deepening crisis, Britain, Germany, the European Union and China made urgent calls for cooperation and for reform of the global financial system whose malfunctions triggered the downturn.

US government figures showed the world’s largest economy shrank by an annual rate of 3.8 percent in the fourth quarter of 2008, sharply accelerating the 0.5 percent contraction seen in the third quarter.