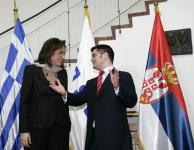 Athens is committed to finding a win-win way out in the row with Skopje over the name ‘Macedonia’, but Skopje’s provocative attitude is dimming chances of a UN-sponsored solution, Greece’s Foreign Minister Dora Bakoyannis said on Monday in Belgrade.

Greece and Macedonia are due to attend a fresh round of UN sponsored talks over their 18-year dispute in New York in mid-February, but analysts say prospects of a deal are slim as both sides are locked in their positions and also battling it out at the International Court of Justice in The Hague.

Bakoyannis noted that Athens felt provoked by the government in Skopje renaming the country’s main highway to “Alexander of Macedon” after the ancient conqueror claimed by both countries. She said such moves inhibit the creation of a climate of mutual confidence.

“I would like to stress once again that a mutually acceptable solution will bring benefit to the Former Yugoslav Republic Of Macedonia,” she said using Macedonia’s provisional name in the United Nations, “and will also strengthen regional stability in southeastern Europe, and at the same time it will boost the country’s EU prospects,” Bakoyannis told Belgrade daily Politika.

Altough never near cordial, relations between the two states sank to a new low last April, when Greece blocked Macedonia’s NATO invitation because of the dispute. Greece says the use of the name implies territorial claims over its own northern province called Macedonia. In retaliation, Macedonia sued Greece in the ICJ arguing that Athens broke its pledge in a UN-sponsored Interim Accord regulating bilateral ties.

Bakoyannis stopped in Serbia during a Balkan tour as part of Greece assuming the presidency of the Organization for Stability and Cooperation in Europe.