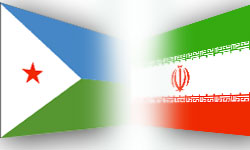 Djama, who is also special envoy of Djiboutian president, called relations between his country and Iran progressive and expressed hope for expansion of bilateral relations.

Referring to Iran’s economic activities in Djibouti, Djama said, “The government and the people of Djibouti feel much respect for Iranian people and government.”

The Iranian vice president, for his part, voiced Iran’s willingness to expand all-out ties with Djibouti.

He also praised positive and principled stance of Djibouti in defending Iran in International community and went on saying, “Friendship and brotherhood is important for us and these features has brought us together.”