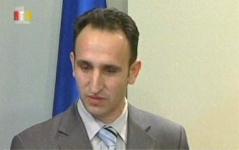 Kosovo named a former senior police officer as the chief of its new Intelligence Service on Wednesday, after months of delays blamed on clientelism and political horse-trading with foreign intelligence agencies.

The Intelligence Agency is one of the central security institutions of the new country, that declared independence from Serbia last February. Analysts say Kosovo needs firm leadership at that post to fight the smuggling and organised crime gangs that operate on the territory, and be prepared for possible organised outbreaks of violence in Serbian minority areas.

Commenting on the nomination, Sejdiu said it was “a compromise”, while Thaci said “it’s good that we chosen a person with good academic background to serve our country.”

Smakaj, who holds a degree in biology and another in political science, had been heading the strategic planning unit of Kosovo Police. In his first statement as head of the Agency, he said that he was “honoured by this nomination.”

“The intelligence agency will be open to all communities living in Kosovo,” Smakaj said, promising that the nascent body will deal with intelligence and counterintelligence information responsibly and “in order to ensure national security and to fight national and international terrorism.”

Smakaj will serve a 5-year mandate in accordance with a special law on intelligence agency, adopted as part of a raft of legislation at the time of Kosovo’s declaration of independence from Serbia on February 27, 2008.

Kosovo’s initial plan was for the Agency to start functioning last summer, but the appointment of the ‘chief spy’ kept being delayed. The opposition criticized the government strongly over the delay, accusing it of wanting to place its own people at a body that should be beyond party politics.