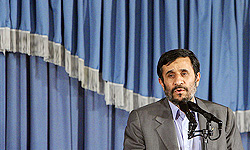 TEHRAN (FNA)- Iranian President Mahmoud Ahmadinejad Thursday called on the world powers to approach Tehran through a logical approach based on mutual respect, saying that the Iranian nation welcomes dialogue and talks as such.

“Iranians are logical people and if you have logical talk to offer, then present it and say it. We listen to and welcome anyone who offers a solution to the problems of the world,” Ahmadinejad said during a meeting with local families of martyrs in Mashhad, capital city of Iran’s northeastern province of Khorassan-e-Razavi.

He said that the world powers should learn how to talk with other nations if they want to change their behavior.

“In order to change your attitudes, you should learn how to talk with other nations and we advise you to revise your behavior as the time for bullying ended with the Islamic Revolution.”

“Bullying powers should learn how to speak correctly and be polite so Iran’s cultured and peace-loving people listen to them,” Ahmadinejad said.

He said using bombs and rockets is not the answer to the world problems and added, “When other nations try to enter the scientific fields the unreasonable powers express concern and get nervous but they themselves use all sciences.”

Iran successfully launched a satellite into orbit late Monday. The US and its allies allege that Iran is using the program as a cover to develop military nuclear capability. Iran insists it is only seeking nuclear energy and space technology for peaceful purposes.

Recalling the story of the Zionist regime’s formation, The Iranian president said, “The unreasonable powers have rigorously sanctioned and pressed Palestinian people for more than 60 years and massacred the innocent Palestinian people under different pretexts.”

“When they are asked why you commit such crimes they claim ‘we have warned them to leave their houses before bombing’. It’s clear that with such logic, the world distances, discriminations and adversities will not end,” Ahmadinejad concluded.