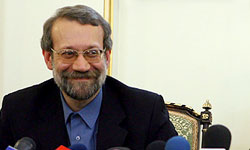 TEHRAN (FNA)- Iranian Parliament Speaker Ali Larijani, in an interview with a German newspaper, said that he believes the dispute over Iranian nuclear issue is not unsolvable.

“The dispute over the nuclear issue is not an unsolvable problem if we stop being entrenched in our positions,” Larijani said in an interview on Sunday with the German Suddeutsche Zeitung newspaper.

He also reiterated that the Iranian government was “ready to talk without pre-conditions” with the United States.

“If the Americans are really willing to resolve the problems, then they must present their concept,” the former Iranian nuclear negotiator added.

In an apparent shift from the Bush administration’s policy on Iran, US President Barack Obama has vowed to engage diplomatically with Iran, saying he will back “tough and direct diplomacy” as a means to end the controversy surrounding Tehran’s nuclear program.

Larijani made the remark a day after Vice President Joe Biden outlined the new US administration’s foreign policy in Munich on Saturday, saying that Washington would move toward direct talks with Iran but at the same time spoke of a continued tough stance.

The Iranian speaker pointed to “inadequate” declarations in US official’s interviews and speeches, saying that “Iran so far has not received any concrete offer from President Barack Obama’s administration”.

“We have heard in media that the Americans would also be ready to talk with us without pre-conditions. But the old clichés about carrots and sticks continue nevertheless,” he said.

The UN nuclear watchdog, however, has confirmed in its November and latest report that Iran has only enriched uranium-235 to a level ‘less than 5 percent’, a rate consistent with the development of a nuclear power plant.