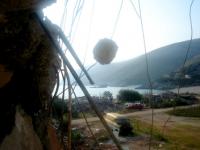 The World Bank’s president, Robert Zoellick, has ordered a new investigation to find out who was responsible for attempts at a cover-up of a Bank misstep in 2006-07 that led to the demolition of a village in southern Albania.

An internal inspection panel report of the International Development Association, IDA, published by Balkan Insight on Jan 31, showed that a World Bank project on coastal zones management in southern Albania aided the demolishment of informal settlements in the village of Jale, in disregard to the Bank’s policies of forced displacement and poverty reduction.

In a statement to FOX News on Wednesday, a World Bank spokesman quites Zoellick as saying in a Dec. 1 letter to the bank’s board that he was “troubled by the problems uncovered in the panel’s report” and would take “immediate steps … to learn what exactly occurred and why.”

The investigation by an inspection panel found that World Bank management failed to comply with its policies with respect to the design, appraisal and implementation of the project, harming the local people affected by it. The probe also found that WB assisted the demolition by pressuring local construction police to take action and by supplying them with equipment and aerial photos.

In addition to the project’s failure to comply with World Bank policies, the investigators noted allegations of corruption and complaints that the demolition of the Jale settlements was part of a bigger scheme to develop the area as a tourist resort. While the panel does not evaluate these allegations, it concludes that the selective demolition carried out by construction police supports the intention to clear the area.

The investigative panel also accused World Bank management of misrepresenting facts during the probe and hampering the investigation by withholding access to data, while it notes the unusual lack of recollection of facts and crucial events by staff. Investigators say that several WB staff members both in headquarters and on the field were “coached” to provide unusually consistent but factually incorrect or misleading information.

In a statement for Balkan Insight on Jan. 30 the World Bank conceded “that mistakes were made in the project, and that ways to address the alleged grievances of those affected are under active consideration.”

“The World Bank is concerned about the errors that were made by management and staff in the context of the project. In accordance with our internal processes, the Bank is reviewing actions of its staff, and, if warranted, will take appropriate action,” the statement said.

According to FOX News, Zoellick has sent a detailed “response” to the board fully accepting the Investigation Panel’s harsh findings, which included evidence of the role of an Albania project coordinator, Jamarber Malltezi, in the demolition and expropriation of the villagers, as part of a “coastal cleanup” project.

Contacted by Balkan Insight Malltezi, also the son-in-law of Albanian Prime Minister Sali Berisha characterized the report of the inspection panel as biased and not factual, and said that in February
the World Bank would compare the report with another report filed by management in response to the allegations, before its board of directors reaches a decision.

Berisha has also denied any wrongdoing from his government meanwhile accusing the bank inspection panel of ties with the Albanian mafia.

“I express my contempt for the unscrupulous slander of the investigative panel in what they call an independent report, but which has been dictated by the Albanian land mafia,” said Berisha in a press conference on Sunday, adding that he had asked World Bank officials to probe the panel’s ties to organized crime.

The bank’s board of directors is scheduled to meet in Washington on Feb. 17 to address the case.