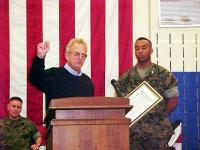 A new resolution at the United States Congress calls on President Barack Obama to urgently restore American efforts in Bosnia and Herzegovina, help it face challenges and avoid further a worsening of the situation, and “maybe a new conflict.”

The new resolution focusing on the troubled country was proposed on Friday by the Chairman of the Committee on Foreign Affairs, Howard Berman from California, and seven other Congressmen.

The resolution noted that despite “notable accomplishments: achieved since the end of the 1992-1995 war, “the citizens of Bosnia and Herzegovina continue to face significant challenges in its efforts to progress toward Euro-Atlantic integration.”

The document, obtained by the Balkan Insight, underlines that “the current constitutional arrangements of Bosnia and Herzegovina are neither efficient nor rational, and that the state-level institutions need to become more effective and democratic if the country is to move toward EU membership.”

The Resolution proposes that Bosnia should urgently work “toward the creation of an efficient and effective state able to meet its domestic and international obligations.” This should include constitutional reform that would “advance the principles of democracy and tolerance, rectify provisions that conflict with the European Charter of Human Rights, include the general public in the process, and be consistent with the goal of EU membership.”

The resolution stated that Bosnia’s Office of the High Representative, OHR, should not be closed – as is expected to happen by the end of this year – until all key requirements for its closure are fully met. It stressed that the EU “should carefully consider its plans for the future deployment of the European Union Force (EUFOR) given the psychological reassurance of security and deterrence of violence provided by its continued presence in Bosnia and Herzegovina.”

“The United States should work closely with and support the EU in the transition to a European Union Special Representative (EUSR) to ensure that the EUSR has the authority and tools to manage effectively post-OHR Bosnia and Herzegovina, including a clear set of EU candidacy and membership conditions with explicit and objective yardsticks and a precise list of benchmarks to increase the functionality of the Bosnian state to be achieved by constitutional reform,” the resolution says.

“The United States should appoint a Special Envoy to the Balkans who can work in partnership with the EU and political leaders in Bosnia and Herzegovina to facilitate reforms at all levels of government and society, while also assisting the political development of other countries in the region,” it concludes.

The Resolution was referred to the Committee on Foreign Affairs ad is expected to enter Congress procedure soon, media reported.

The Bosniak (Bosnian Muslim) member of Bosnia’s tripartite presidency, Haris Silajdzic applauded the initiative and said “it’s in the interests of the United States to have a stable normal democracy in Bosnia-Herzegovina.”

In several interviews during his visit to New York over the weekend, Silajdzic painted a grim picture of Bosnia, a country with divided local leaders and mostly abandoned by the West.

“It can be fixed if the US government re-engages to protect its political investment,” Silajdzic said in an interview with Bloomberg published on Saturday, adding that stronger American presence would help “the Europeans and all of us to make it right.”

Without stronger international engagement and if the current trend continues, the country could be facing a “potentially destabilizing situation” and even “maybe a new conflict,” Silajdzic told the Wall Street Journal.

Silajdzic suggested that appointing of a new US special envoy or sending of a delegation, which would focus on the Western Balkans, could provide the energy and influence needed to break Bosnia’s deadlock.

The US changed its approach to the Balkans during the administration of President Bill Clinton. Stronger American military, political and financial efforts were key to halting Bosnia’s 1992-1995 war, maintaining the peace and stabilizing the country in the first few post-war years.

Some four years ago, US President George W. Bush declared Bosnia a “success story” and effectively pulled out from the region, leaving it to the confused and divided EU for safekeeping. American withdrawal and EU inefficiency allowed a gradual deterioration of the situation and led to country’s ever worsening political crisis.