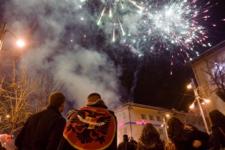 Three young Serbs were beaten up by a group of Albanians in the town of Lipljan in central Kosovo late on Tuesday, Belgrade media reported.

They were hospitalised with light injuries, with one suffering a broken arm, Beta agency reported. They told police that the attackers waited in ambush around 11 p.m. after a soccer match and started beating them with wooden bats.

Lipljan is the only urban place south of the Ibar river with a mixed population of both Serbs and Albanians. The previous night a church souvenire shop in the Lipljan church yard was broken.

Serbian state news agency Tanjug said several small incidents were noted on Tuesday, Feb 17, the first anniversary of Kosovo’s independence declaration. A young Serb was lightly wounded with a gun shot, probably a stray bullet from Albanians celebrating, and an Albanian flag was put on a Serb Orthodox churche in a village near the Serb enclave of Strbac, later taken down by the police.