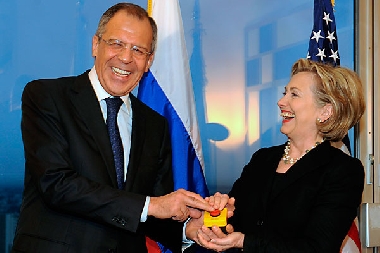 MOSCOW – US Secretary of State Hillary Clinton and Russian Foreign Minister Sergei Lavrov officially pressed the “reset button” on the frozen Russia-US relationship at a Geneva tete-a-tete Friday evening, but the reboot is likely to be lengthy and troubled.

It didn’t help that a button Ms. Clinton gave Mr. Lavrov, meant to be a symbolic gift with a Russian-language label reading “reset,” actually said “overcharge,” in an apparent translation error.

Ms. Clinton’s first real chance to chat with her Russian counterpart – the two met briefly at a conference in Egypt last Monday – took place over dinner, and the agenda was all about taking the temperature and sketching out areas of agreement for Presidents Barack Obama and Dmitri Medvedev to follow up at their first encounter on the sidelines of next month’s G-20 summit in London.

“We are entering into our renewed relationship with our eyes open,” Clinton said before meeting Mr. Lavrov. “We think there are a number of areas where there could be cooperation … there are also areas where we strongly disagree.”

Russia’s foreign ministry echoed her tone. “We are waiting with cautious optimism the outcome of these talks,” it said in a statement Friday. “We expect good results.”

One obstacle was removed when, following a tough internal debate at a Brussels meeting on Thursday, NATO agreed to restore normal relations with Moscow seven months after shutting them down amid outrage over Russia’s summer war with the ex-Soviet republic of Georgia.

The items that should be relatively easy for Clinton to discuss with Lavrov include efforts to establish a stable supply route through former Soviet territory for NATO’s military mission in Afghanistan and starting up negotiations for a new accord to replace the soon-to-expire Strategic Arms Reduction Treaty, or START. (Read the Monitor’s report on the expected negotiations to replace START here.)

Russian experts say the US has little choice but to turn back toward Moscow in its efforts to handle an increasingly volatile and crisis-plagued world. “We’re doomed to work together for stability,” says Sergei Kazyennov, an expert at the official Institute of International Relations and World Economy in Moscow. “We already know our differences and limitations, but there’s no alternative but to press ahead.”

But thornier issues could block the way, particularly differences over how to deal with Iran’s alleged drive to obtain nuclear weapons. Russia has ruled out any deal that might involve stopping its lucrative arms and nuclear energy trade with Teheran, but insists it’s willing to work with Washington in search of a diplomatic solution.

Another is US plans to station anti-missile weapons in Poland, a prospect that makes the Russians see red.

“If the United States’ original plan on deploying this shield in Europe is somehow reviewed … we would regard this as an excellent sign,” Prime Minister Vladimir Putin’s official spokesman, Dmitri Peskov, told a Russian state radio Friday. “This is what we have been talking about from the very start.”

If not, Russia has already indicated that it’s ready to ratchet up nuclear tensions by stationing Iskander medium-range missiles in its Baltic enclave of Kaliningrad.

Another potential trouble spot is Washington’s support for admitting the ex-Soviet republics of Georgia and Ukraine into NATO, a position Clinton reaffirmed Friday. “We do not recognize any sphere of influence on the part of Russia, or their having some kind of veto power over who can join the EU or who can join NATO,” she said.