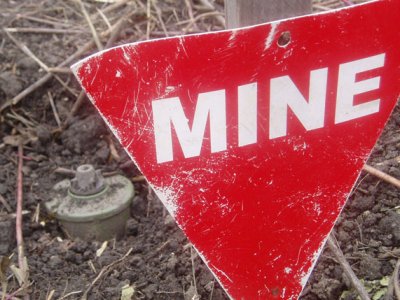 About 160,000 people in Serbia are still in danger from thousands of unexploded cluster bombs a decade after NATO’s bombing campaign in Yugoslavia, a Norway-based aid organisation said on Tuesday.

The study by Norwegian People’s Aid, made public in Belgrade, said NATO cluster bombs were scattered throughout 15 municipalities in Serbia’s south, near the border with now-independent Kosovo.

Up to 50 percent of the population in the region that includes the country’s third-largest city, Nis, were directly endangered from unexploded cluster bombs, the report said.

About 20 people had been killed or maimed by the ordnance since 1999, said Miroslav Pisarevic, a researcher on the project funded by Norway’s Foreign Ministry.

“Unexploded cluster bombs are lurking from between 50 cm and 70 cm underground. They are a permanent threat,” Pisarevic said in a broadcast on B92 television.

In 1999, NATO conducted a 78-day bombing of what was then Yugoslavia to end a crackdown by Serbian security troops against rebellious ethnic Albanians in Kosovo.

NATO used cluster bombs, which typically eject clusters of smaller “bomblets” to spread their effect, for attacking such targets as army convoys or troop concentrations in Kosovo.

In December, 93 countries signed a Convention on Cluster Munitions, designed to prohibit their use, but major arms-producing countries such as the United States, Russia and China have shunned it.