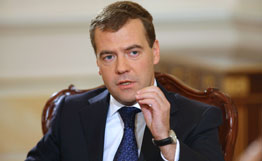 MOSCOW – Russia will prioritize the reform of international financial institutions, control of advanced economies’ macroeconomic indices and audit and accounting issues at a G20 summit in London, President Dmitry Medvedev said on Sunday.

Medvedev will attend the summit of G20 leaders in London on April 2 for discussions on overcoming the global financial crisis and reform of international financial structures.

“The current crisis has shown that their [the international financial organizations’] activity is far from ideal – the International Monetary Fund, World Bank, and other structures,” Medvedev said in an interview broadcast Sunday on Russia’s First Channel.

Medvedev also said it was important to exercise control of the macroeconomic indices of the countries that influence the world financial situation to prevent a chain reaction, as he referred to the subprime mortgage crisis in the United States that eventually spilled over to other countries.

According to Medvedev, it is necessary to create mechanisms making it possible to influence decisions made by partner countries and at the same time allowing for protection against negative impacts.

Medvedev also said that fair auditing and accounting rules should be worked out to suit all parties.