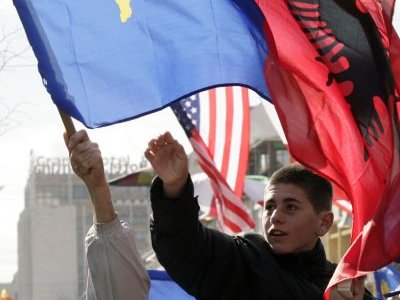 Most of the remaining 120,000 Serbs refuse to cooperate with Albanian-run institutions.

Many Kosovo Albanians view the U.N. presence as an obstacle to independence a year after they seceded from Serbia, U.N. Secretary-General Ban Ki-moon said in a new report released on Thursday.

“There is a perception among many Kosovo Albanians that the mission’s tasks have been accomplished and its continued presence is an unwelcome obstacle to the desire for Kosovo to function as a sovereign state,” Ban said in his latest report to the U.N. Security Council on U.N. activities in Kosovo.

“The Kosovo authorities, who have been under significant pressure from opposition parties, have repeatedly stated during the past months that resolution 1244 is no longer relevant and that the institutions of Kosovo have no legal obligation to abide by it,” the report said.

The Security Council passed resolution 1244 in 1999 to establish a U.N. administration in Kosovo after a NATO bombing campaign against Serbia forced Belgrade to withdraw its security forces from the region. That marked the end of a 1998-1999 war between Serb forces and Albanian guerrillas.

Officially the United Nations remains in charge of Kosovo. The 15-nation council has been unable to make any changes to the U.N. mandate because its members are split over what to do with the U.N. presence there and the legality of Pristina’s February 2008 declaration of independence.

Kosovo is 90 percent Albanian. Most of the remaining 120,000 Serbs refuse to cooperate with Albanian-run institutions.

Under a six-point plan agreed last year, police, customs officers and judges in the Serb-run areas of Kosovo remain under the U.N. umbrella, known as UNMIK, while their Albanian counterparts work with a European Union police and justice mission called EULEX.

“In line with Belgrade’s official policy, many Kosovo Serbs continue to reject the authority of Kosovo … although increasing numbers are applying for Kosovo identity cards, driver’s licenses and other Kosovo documentation that facilitates their ability to live … in Kosovo,” Ban said.

Apart from a few incidents in predominantly Serbian parts of northern Kosovo, the overall security situation was stable during the period from November to March, the report said.

Many Western countries have recognized Kosovo’s independence. Serbia and its principal ally Russia, which is a permanent veto-wielding member of the Security Council, have said they will never recognize an independent Kosovo.

The U.N. presence has been gradually reduced over the past year, though Ban said UNMIK would maintain a small presence in Kosovo, mainly in Mitrovica in northern Kosovo.