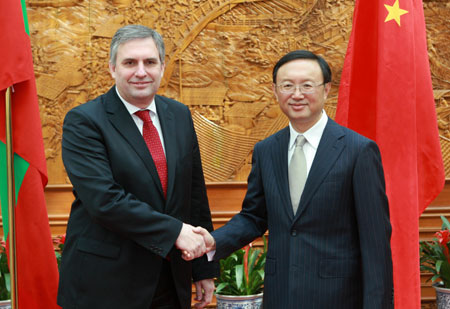 Yang applauded Sino-Bulgarian fruitful cooperation in the areas of politics, culture, the economy and trade, as well as science and education, saying both countries have maintained close communication and cooperation in international affairs.

Yang said that “China attaches importance to its traditional friendship with Bulgaria.” Both sides will hold celebrations to mark the 60th anniversary of their diplomatic relations.

“China will take this as an opportunity to work with Bulgaria to promote bilateral relations,” Yang added.

Speaking of the ongoing financial crisis, Kalfin said: “We wish to deepen cooperation with China in various fields, so as to turn challenge into opportunity.”

Kalfin also expressed his wish for the success of celebrations during the 60th anniversary of Sino-Bulgarian diplomatic relations.

Bulgaria will adhere to the one-China policy and recognizes Taiwan and Tibet as inalienable parts of China, Kalfin added.