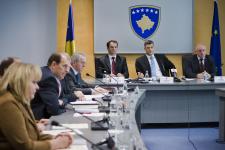 Government ministries have been taking decisions on a range of different issues unnoticed by the public gaze, a report published by Kosovo’s Institute for Advanced Studies, GAP, claims.

This, the NGO states, has been primarily caused by lack of suitable mechanisms for monitoring government activities within the NGO community, little active publicity from the government and a growing disinterest in the media about government decisions.

For instance, the Office for Communities, administered through the Prime Minister’s Office, has made no progress other than “the appointment of the head of the Office”, reads the report.

In order to redress this situation, GAP announced plans to produce a monthly report giving detail “on all Kosovo Government decisions, through a publication to be known as the ‘GAP Monitor of Governments Decisions’”.

Reports are to be published each month, detailing government decisions and giving accompanying in depth explanations.