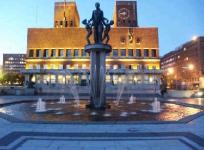 The Royal Norwegian Embassy in Kosovo has released a statement encouraging foreign investment in Kosovo, following the launch of a website by a private Norwegian company arguing against investment.

“Don’t Invest in Kosovo” is the name of a web domain recently created by a Norwegian company in a campaign to highlight what it calls “millions of euros of waste” in Kosovo.

However, the Royal Norwegian in Kosovo has distanced itself from the firm, announcing that its opinions are separate from that of the government.

“The Royal Norwegian Embassy in Kosovo is aware of a campaign that has recently been initiated by a private company called “Norway Invest”. The campaign discourages international companies from investing in the Republic of Kosovo. The position taken or statements made by this company do not reflect the positions and policy of the Norwegian government in relation to Kosovo. This is a private initiative reflecting the private opinions of a group of Norwegian citizens”, it says.

In addition, the press release highlight’s support of Kosovo’s development, and also stresses the opportunities of foreign investment in the country.

“The Embassy would also like to remind the public that Norway is one of Kosovo’s largest contributors in development assistance and has been a consistent supporter of its overall progress during the recent past. Norway remains a committed supporter of Kosovo in its path towards economic development and its integration into Euro-Atlantic institutions. To this end, Norway encourages foreign companies to invest in the Republic of Kosovo and to make use of the advantages that it offers”.

Post Views: 256
Previous Albanian Economy ‘Grew 8%’ in 2008
Next ‘Quarter of Bulgarians’ Would Sell their Vote