US Asks Bangladesh to Recognise Kosovo 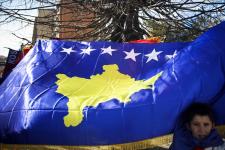 The US has asked Bangladesh to recognise Kosovo’s independence through its Ambassador to Dhaka.

The US Ambassador to Dhaka, James Moriarty met Bangladesh’s Foreign Minister, Dipu Moni, and during that meeting asked his country to recognise Kosovo’s independence.

“I call on the Bangladeshi government to review this issue, and if possible to proceed with Kosovo’s recognition,” said Moriarty.

Also at the meeting, the US Ambassador said he is willing to arrange a meeting between Bangladeshi Prime Minister, Sheik Hasina and US President Barack Obama.

“We talked about various bilateral issues,” said Moriarty after his meeting with Bangladesh’s Foreign Minister. “I also referred once again to a big international issue, such as Kosovo’s independence,” he added.

Bangladesh is the third largest Muslim country in Asia. Kosovo declared independence from Serbia in February 17, 2008, and has so far been recognised by 58 countries around the world.