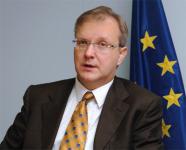 EU Enlargement Commissioner Olli Rehn will meet the foreign ministers of Croatia and Slovenia in Brussels on Wednesday, spokesman for Rehn Krisztina Nagy said on Tuesday.

“I can confirm that the meeting will take place on Wednesday afternoon,” Nagy said.

This will be the first meeting after the two countries submitted their responses to his final compromise solution to the Croatian-Slovene border dispute, which is currently blocking Zagreb’s EU entry talks.

Rehn presented his latest proposal for the settlement of the Croatian-Slovene border dispute at a meeting with the two countries foreign ministers on 22 April. Croatia accepted the proposal on 8 May. Slovenia submitted its response only last week together with several amendments.

Under Rehn’s proposal, the border at sea and on land between Croatia and Slovenia would be set by a five-member arbitration tribunal in line with international law.

EU foreign ministers have expressed massive support for Rehn’s proposal for the settlement of the Croatian-Slovene border dispute and expect the issue to be resolved urgently because the stakes are high.