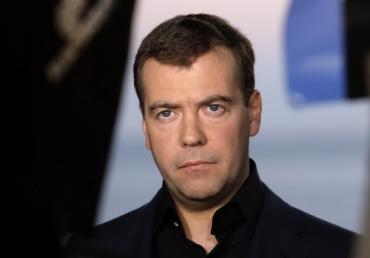 “I would like to inform you that over Ukraine’s anti-Russian policies I have made the decision to delay sending our new ambassador to Ukraine,” Medvedev said in a video message to his Ukrainian counterpart, Viktor Yushchenko.

The Ukrainian Foreign Ministry has already approved of the appointment of former health minister Mikhail Zurabov to the post.

Medvedev added that the timing of Zurabov’s arrival would be determined later, depending on the development of bilateral ties.

The Russian president pointed the finger at his Ukrainian counterpart, Viktor Yushchenko, for the worsening in relations between the neighbors, expressing his “deep concern at the current, without exaggeration, crisis in Russian-Ukrainian relations.”

“We observe that during the years of your presidency, and it is impossible to see it differently, that the Ukrainian side has withdrawn from the principles of friendship and partnership with Russia,” Medvedev said, taking the unusual step of speaking directly to Yushchenko in the open address.

With Yushchenko fighting for his political life ahead of presidential elections in January, Medvedev also warned against “yielding to the temptation of embroiling our nations for the sake of anyone’s geopolitical interests or political career.”

Medvedev chose to make his message public because of the level of interest among the people of Russia and Ukraine in the state of bilateral relations, which “directly affects their daily life and future.”

The Russian leader went on to speak to the people of Ukraine.

“Ukrainians have from time immemorial been and remain not only neighbors but a fraternal nation toward which we will always have the kindest feelings, with which we are brought closer together by common history, culture and religion, are united by close economic cooperation, strong kindred and human ties,” he said.

Medvedev said that the strains in relations were making it impossible to fully develop the potential of bilateral economic relations.

“Russian companies regularly have to deal with open opposition from Ukrainian authorities,” he said.

Ukraine and the European Union signed a declaration in March to modernize the ex-Soviet state’s natural gas pipeline network. Russia, which transits about 80% of its Europe-bound gas via Ukraine, said it was excluded from the talks in Brussels, and Prime Minister Vladimir Putin threatened to review ties with the EU.

“A year after the tragic events, the issue of how peaceful civilians and Russian peacekeepers in Tskhinvali were killed with Ukrainian weapons is again being pointedly raised. Those in Kiev who supplied armaments to the Georgian armed forces… share the responsibility for committed crimes with Tbilisi,” he said.

Medvedev added that bilateral relations were complicated also by the unwillingness of Ukrainian authorities to cooperate on issues involving Russia’s Black Sea Fleet in Sevastopol, but added that he hoped for a new strategic partnership with the next leaders of Ukraine.

Yushchenko is polling in the single digits, with Party of Regions leader Viktor Yanukovych favored by about a quarter of the electorate, Prime Minister Yulia Tymoshenko on 15% and former parliamentary speaker and millionaire businessman Arseniy Yatsenyuk in third place with about 13% support.