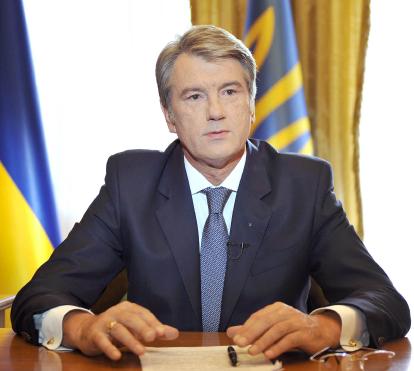 Ukrainian President Viktor Yushchenko rejected criticism of Kiev’s policy towards Moscow in a stinging attack from Russian President Dmitry Medvedev who had accused him of being anti-Russian.

“I am very disappointed by the openly unfriendly” comments by Medvedev, he said in a letter to the Russian president published on the Web site of the Ukrainian presidency late on Thursday.

“I cannot fail to recognize that relations between our countries have been tarnished by serious problems, but it is strange that you completely excluded Russia’s responsibility,” he said in his letter to Medvedev. “Our state has always respected the principles of friendship and partnership with Russia,” he added.

A copy of Yuschenko’s response was sent to the charge d’affaires at the Russian embassy in Kiev. Medvedev’s broadside accused the Yushchenko administration of still seeking to ship arms to pro-Western Georgia; and of creating difficulties for the Russia’s Black Sea fleet, based on the Crimean peninsula in southern Ukraine.

But Yuschenko said criticism over arms shipments to Georgia were unfounded. So far as Ukraine’s interest in NATO membership was concerned – another issue that has angered Russia — he insisted on Ukraine’s right to go its own way.

Analysts and Russian newspapers have interpreted Medvedev’s attack on Yushchenko Tuesday as a bid by Moscow to completely sideline the pro-Western president ahead of January presidential elections. Medvedev also said that Moscow would not be sending a new ambassador to Kiev due to the policies of Yushchenko, who he said was ignoring “principles of friendship and partnership with Russia.”

Yuschenko argued in Thursday’s letter that this would not help develop “constructive relations” between the two countries. Despite this announcement Medvedev on Thursday named the new ambassador to Kiev as former social development minister Mikhail Zurabov, the Kremlin announced, though there was still no word on when he might be posted there.