Rama to run for another term as head of Socialists 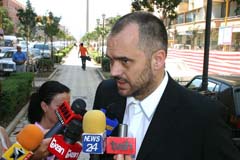 Edi Rama, the current leader of the Socialists – the biggest opposition party in Albania, said he would run again for another term at the upcoming party’s congress scheduled for end of August.

Despite facing numerous accusations from other parties and his Socialists as wells, Rama said he strongly believed that he should retain the post of party’s president.

On the other hand, some of the Rama’s fellow partisans called him to give up intention for another candidacy following the party’s defeat in June’s elections

Post Views: 70
Previous Over 4,000 victims of communism in Albania have no graves
Next Ivanov: ARM is one of the greatest Ambassadors of Macedonia