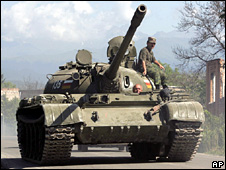 Regular soldiers, as well as 200 members of a Ukrainian nationalist group, took part in the fighting, the prosecutor general’s office said.

The statement comes amid worsening relations between Moscow and Kiev.  Ukraine denied it helped Georgian attempts to re-assert control over the breakaway region of South Ossetia.

It is believed to be the first time a Russian official has made such a direct accusation in a long war of words between Moscow and Kiev about the conflict, says the BBC’s Richard Galpin in Moscow.

A spokesman for the office said Ukrainian anti-aircraft weapons had been seized, and went on to name individual UNA-UNSO members involved.

He also claimed to have evidence including uniforms, photographs and other personal belongings.

Ukrainian defence ministry spokesman Konstantin Sadilov told AP news agency no members of Ukraine’s military had fought in the war, though he did not rule out the possibility that other Ukrainians could have taken part.

Relations between the two countries took another turn for the worse earlier this month when the Russian President Dmitry Medvedev accused Ukraine of pursuing anti-Russian policies.

He added that there was no hope of any improvement in relations while the Ukrainian President Viktor Yushchenko remained in power.