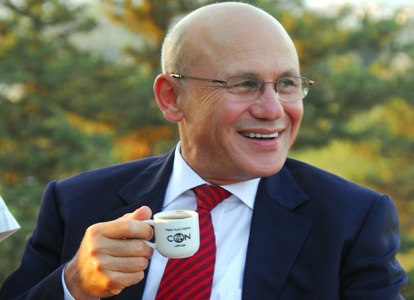 Talat said Turkish Cypriots have other alternatives to consider if the Greek Cypriots “refuse resolution as they did in 2004.”

The Turkish Cypriot president said his people want to see a resolution to the issue, but that such a resolution cannot be one-sided. “What will happen if the other side does not want a resolution and prevents it from taking place? Do we have any other alternatives? Of course we do,” he said.

Talat repeated his remarks that talks cannot be allowed to go on endlessly. “There is a deadline; we need to complete the process by that time,” he said, adding that if there was not a resolution by then, “motivation would die.”

The two leaders have a meeting scheduled every week, he said. “It has become a part of my life. But this is not the goal. The goal is resolving the Cyprus issue,” Talat said. “For this, we need to focus more on this subject. We want this because we have been isolated; we need it. The Greek Cypriot side, however, sees it as a routine.”

In response to a question, Talat said the Greek Cypriot side has agreed with Turkish Cypriot Prime Minister Derviş Eroğlu to include a person to represent the government but that the name had not been decided on.

Post Views: 75
Previous Russia, Romania “concerned by Kosovo situation”
Next Lack of a quorum in Parliament