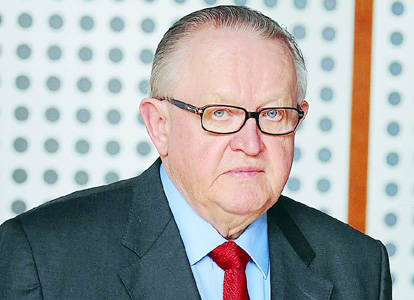 Turkey-skeptic European leaders should change their stance while Turkish government leaders should recommit themselves to the reform process, a group of experts recommended Monday for putting Turkish-European relations back on track.

The latest report by the Independent Commission on Turkey, which is chaired by Finland’s 2008 Nobel Peace Prize winner Martti Ahtisaari, criticized EU leaders for slowing down the accession talks and giving the impression they do not want Turkey to join the bloc.

The Independent Commission on Turkey was established in March 2004 by a group of concerned Europeans who were seeking to contribute to a more objective and rational debate about Turkey’s accession to the European Union.

The report, “Turkey in Europe: Breaking the Vicious Circle,” asserted that despite a promising start to negotiations in 2004, the process has become a vicious cycle. Fierce opposition from some European politicians combined with growing public resistance to more EU enlargement in turn has deepened resentment in Turkey and slowed the necessary reforms, the report said.

The report was quite critical of countries that have opposed Turkey’s entry and instead offered alternatives to full membership: “Negative attitudes and policies of European leaders are in clear contradiction to all previous EU decisions and commitment. They put in question EU credibility, reliability and the principle of pacta sunt servanda, that agreements are to be honoured.”

Undermining talks in advance by substituting alternative arrangements for the goal of membership constitutes a breach of faith with Turkey, stokes up a nationalist backlash in the country and creates the wider impression that the EU has discriminatory double standards when dealing with a Muslim country, according to the report.

France’s Nicolas Sarkozy and Germany’s Angela Merkel are both known to oppose Turkish membership. They advocate a “privileged partnership” instead of full membership. The report urges European governments to honor their commitments and treat Turkey with fairness and the respect it deserves. The report also criticized offering Turkey a “privileged partnership,” adding the shared objective of negotiations is accession.

Meanwhile, members of the commission were also critical of Turkey for failing to sustain the reform process. The Turkish government was advised to renew the reform process, in particular enacting a new constitution, a functioning ombudsman, full freedoms for religious organizations, respect for cultural liberties and wider freedom of expression.

“Turkey is a key geo-strategic partner for Europe, particularly because of its regional role and its central location for energy supplies from the Caspian Sea, Central Asia and the Middle East,” the report stated.

“Since the golden age of reforms between 2000 and 2005, domestic political disruptions have distracted Turkey from reforms. Two years without elections now lie ahead, and all sides must act now to prevent the country’s convergence with the EU from stalling. Comprehensive, consistent and sustained progress toward more democracy at home is the best way to persuade more Europeans of Turkey’s EU compatibility.”

In conclusion the report said Independent Commission on Turkey remains convinced of the huge benefits of Turkish convergence with Europe and eventual EU membership of a transformed Turkey, both for the country itself and for the EU.

On Jan. 6, 2019, the eve of Orthodox Christmas, the Ecumenical Patriarchate in Istanbul awarded …