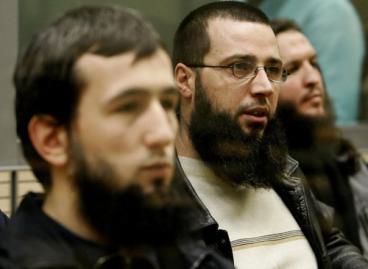 The Special Court in Belgrade has sentenced four Wahhabi to a total of 27 years in prison.

Adis Murić and Bajram Aslani were sentenced to eight years, Nedžad Bulić to seven, and Enes Mujanović to four years.

The group was accused of criminal association with a view to unconstitutional activities and preparing terrorist acts throughout Serbia, including, according to the indictment, a planned attack on a football match in Novi Pazar. The trial lasted eight months.

According to the indictment, they purchased a large quantity of weapons, ammunition and explosive devices, which they planned to use against police officers in Novi Pazar.This will be the second verdict against a group of extremist Wahabbi after a 12-member group, arrested on Mount Ninaj in 2007, recently received lengthy prison terms.

Adis Murić, Nedžad Bulić and Enes Mujanović from Novi Pazar, and Bajram Aslani from Kosovska Mitrovica are accused of criminal association between May and September 2007 in order to “gain religious and political power,” according to the indictment. Bulić and Aslani are on the run and are being tried in absentia.

The prosecution posits that the group planned to plant explosives at the football stadium in Novi Pazar and kill police officers responsible for security at a match. In its closing statement, the prosecution called for stiff sentences, noting that Serbia had been subjected to terrorist activity over the last 15 or so years.

This trial has not attracted the media spotlight to the same extent as the trial of the 12-member group, whose members were sentenced in July.

That group, which was arrested on Mount Ninaj in 2007, was found in possession of a large stash of weapons and ammunition. Ismail Prentić, who was earmarked as the group’s leader, died one month later while resisting arrest in the village of Donja Trnava.

Although the prosecution was unable to link the two groups of Wahhabi, both were charged with terrorism.

Interestingly enough, the Wahhabi are putting up no defense at their trial, nor do they even recognize their defense counsel. The reason for this, Professor of Islamic Sciences at Sarajevo University Rešid Hafizović explains, is that they do not recognize the state.

The trial raises the question of whether Serbia is free of the threat of extremist Wahhabi activities following the two sentences that also follow the seizure of a large cache of weapons and ammunition.

“I don’t think the Wahhabi movement has been destroyed, nor will it be any time soon. Moreover, it needs to be stressed that it is not a crime to practice Islam in the traditional way, which is what Wahhabism is. But if someone uses weapons, then that definitely is a crime,” religious analyst Mirko Đorđević told B92.

Wahhabi are in conflict not only with the state because of their violent methods, but with the Islamic community itself, which does not recognize its archaic ideas, that have led many to call them the guardians of traditional Islam. B92’s guests stated that they did not believe that the arrest of two groups of 15 people would deal a final blow to the idea since Wahhabism was a global phenomenon.

The indictment itself states that ties had been forged with groups in Bosnia-Hercegovina, Macedonia, Albania, Georgia and Syria. During the group’s arrest, two members were found to be carrying CDs with footage of U.S. soldiers being killed in Afghanistan and Iraq, Russian soldiers in Chechnya, as well as footage of suicide bombers and other material extolling the virtues of jihad.

Post Views: 71
Previous First conference on ‘What must be Georgian foreign policy?’ held in Tbilisi
Next Sejdiu on missing Albanians