Gül: Security in the Caucasus will bring stability and development to the region 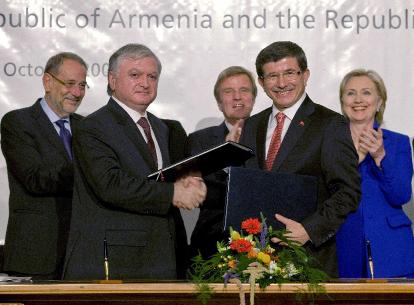 In its efforts to normalize relations with Armenia, Turkey does not have in mind its European Union accession bid but peace in the region, said President Abdullah Gül in an interview with a French magazine. Peace in the region will bring development and prosperity in return, he believes

In an interview with French magazine L’Express, President Abdullah Gül said that if there was security in the Caucasus, there could be stability, development and prosperity in the region.

Turkey and Armenia signed two protocols in Zurich on Oct. 10, aimed to normalize relations between the two countries. U.S., Russian, and European officials were also present at the signing. Gül said there was no foreign pressure on Turkey to sign the protocols. “Our policy is to bring stability and security to the region, maintain good relations with our neighbors, and solve problems that were left on the shelf. Having said that, we are grateful to those who helped us establish this process.”

Instead of international pressure, Gül said the driving force behind the singing of the protocol was to bring stability and development to the region.

“If security is introduced to the Caucasus, there will also be stability and, hence, development and prosperity. The Cold War is over. Everyone wants to satisfy his own people and take the path of cooperation,” said Gül. “Dormant wars can heat up any time. We have seen this happen between Russia and Georgia. Issues in the Caucasus should be resolved.”

Gül said the border between Turkey and Armenia would open once the protocols are approved by each country’s parliament and signed by the foreign ministers. He said the process foresees normalization in all fields and the project for peace, cooperation, and stabilization in the Caucasus also includes Armenia.

Asked whether Turkey has made concessions in the protocols, Gül said he did not want to think of it in these terms, as it would not bring peace. “It is necessary to have long-term and broad vision.”

He said he does not believe that the protocols freezing the Nagorno-Karabakh issue are a concession on the part of Turkey. “The fact that a country is occupying the territory of another country is unacceptable. Therefore, that issue should be resolved through dialogue,” said Gül. He asked: “Why would Armenia and Azerbaijan not be able to improve their relationship?”

Reminded that there have been reactions from the Armenian diaspora against the protocols for “failing to mention” the events of 1915 and asked whether he thought this would weaken the effect of the protocols, Gül said: “It is not for me to rule on disputes among Armenians.”

He said: “But I want to issue a call for cooperation. The Armenians living in France are far from Armenia. If they want to lend their support to the Armenians of Armenia, they must support the process.”

Gül said there were different interpretations of the 1915 events. “But we show our confidence in ourselves by opening our archives, including military archives. Let a committee of historians, even experts of the subject from third countries, work on this issue. We will recognize its conclusions,” said Gül.

He said Turkey did not have its European Union accession bid in mind in its relations with Armenia. “While conducting our policy vis-à-vis Armenia, we absolutely do not have the European Union in mind,” said Gül.

Post Views: 109
Previous US to spend $100 mln to build bases in Bulgaria and Romania
Next Tiraspol, concerned with Chisinau accusations about the fact Transnistria is responsible of the explosion from 14 October