Albania to Bolster Ties with Serbia 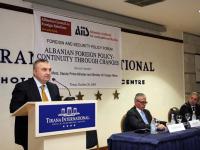 Foreign Affairs Minister Ilir Meta, declared on Monday that Albania would move to strengthen its ties with Serbia, describing the country as an important partner for regional stability in the Balkans.

“The strengthening of our relationship with Serbia is an important priority for our regional policy,” said Meta, speaking during a Tirana conference, organised by the Albanian Institute for International Studies. “We will work closely and with intensity with Serbia’s government on reciprocal and regional issues,” he added.

Meta said that Albania would back Serbia’s participation in the Southeastern Europe Defence Ministers’ meeting, arguing that without Belgrade’s participation such meetings and organisations would be incomplete.

Tensions between Tirana and Belgrade flared in August after Albanian Prime Minister Sali Berisha spoke of the “national unification” of Albanians in the region during an interview with a local broadcaster.

The statement elicited a protest note from Serbia’s Foreign Affairs Ministry, which described the comment as “provocative and a breach of its [Serbia’s] sovereignty and territorial integrity”.

Kosovo declared independence on February 17, 2008, and has been recognised as a sovereign state by 63 countries, including the US and major EU states, but Belgrade maintains that it remains an integral part of Serbia.