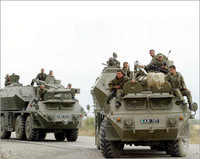 Five Georgians were freed by the Ossetian separatists. They were detained yesterday in the Karelia region of Georgia on charges of violating the administrative border of South Ossetia.

The Georgians freed in Tskhinvali told their relatives that they were already moving to the territory controlled by the Georgians. The EU monitors, who on Wednesday organized a meeting of Georgian and Ossetian sides, participated in freeing Georgians.

Up to now, other 16 Georgians, who were also arrested for breaking the border and illegal logging, have been kept in Tskhinvali.