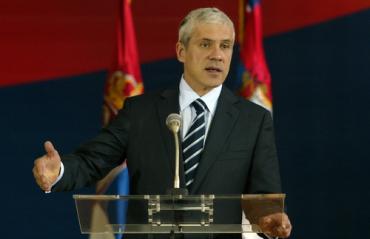 President Boris Tadić says Belgrade will continue to insist on a resumption of talks on Kosovo and finding a compromise solution.

This, the president told state broadcaster RTS late on Wednesday, regardless of the stand of the International Court of Justice (ICJ) stand on the issue of the legality of the unilateral declaration of independence by Kosovo’s ethnic Albanians.

Tadić also underscored that the policy of peace “immunizes Serbia from attacks coming from international public”.

According to him, “there is no doubt that things regarding Kosovo and Metohija may change, either as a consequence of the economic crisis or as a result of the changes in relations on the international political scene”.

“In that sense, it is of major importance that Serbia has two influential states, China and Russia, on its side,” said he.

“As for the proceedings before the International Court of Justice, we will make a decision when the time comes. We are now analyzing every model, but we hope for a positive solution,” said Tadić.

“We are ready to undertake new initiatives, that have not been undertaken from the very beginning. I’m an optimist and hope for a positive response of the ICJ.”

The president was also quoted on the RTS website as saying, “A few years ago a world politician told me, ‘You will have to recognize Kosovo’s independence sooner or later’. Last year, the same politician spoke to me in this way: ‘Soon the international community will address you to give you back something that’s yours’.”

Kosovo partition not on agenda; Mladić, Hadžić not in Serbia

In a separate interview published on Thursday, this time for Germany’s Neues Deutschland, Tadić has stated that without Serbia, which wants to join the EU, there is no integration of the Western Balkans.

Serbia provides the Union with stability in the Balkans, and is the shortest road between Western Europe and Turkey, as well as a cultural, political and economic pillar of South Europe as a whole, said he.

“Serbia has already given to EU something concrete: stability in the Balkans, despite all the suffering that we were exposed to. I do not believe that any other country would respond in such democratic and peaceful way to a unilateral declaration of independence by its province[Kosovo]. Serbia has thus given an example that may be followed in all conflicts in the world,” Tadić was quoted as saying.

He reiterated that Serbia will never recognize Kosovo.

“I repeat that we will never recognize Kosovo, not today and not in the future. I also repeat that we will defend our position using peaceful and diplomatic means,” said he, adding that Serbia is waiting for a ruling of the International Court of Justice, which is expected in 2010.

“I hope and I am confident that the decision will be very positive for Serbia. After that, we will be always ready to discuss the future of Kosovo with Priština [Kosovo Albanians].”

He repeated once again that he expects the ICJ ruling on the legality of the ethnic Albanian unilateral secession declaration will be favorable for Serbia, and announced that afterwards, “Serbia will at all times be ready to negotiate with Priština on the future of Kosovo, taking into account legitimate interests of both Serbs and Albanians”.

Asked whether Belgrade has Plan B in case the ICJ decision is unfavorable, Tadić said that “the moment is not right for such contemplations”, and that, “in any case, war is not part of the deliberations on that issue”.

The zero-sum game, the president told the newspaper, “is unsustainable in the long run”.

Responding to a question about Kosovo’s partition as a possible solution, Tadić underscored that he supports integrity of every country as a principle.

“A division is not on the agenda at the moment,” said he, according to a Tanjug report.

Tadić also commented on the issue of Belgrade’s “full cooperation with the Hague” that is blocking the country’s EU accession ambition, to say that Belgrade has extradited 44 out of 46 Hague indictees and that this cooperation is “an obligation of the Serb democracy”.

“The whereabouts of Ratko Mladić and Goran Hadžić are not known thus far,” he said of the two remaining fugitives. “I would be happy if there were in Serbia, because then Serbia could fulfill its obligations. But, they are not in Serbia, which means we’re in a blind alley.”