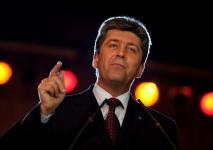 Kosovo, whose party is part of the coalition supporting the current right-of-centre GERB party, said his party would back an impeachment procedure if evidence shows that Parvanov, in his capacity of one-time leader of the Bulgarian Socialist Party, was involved in illegal activities supporting former Iraqi President Saddam Hussein under the UN Oil for Food program the late 1990s. He has asked the cabinet to ask for relevant information from the Iraqi government.

Ataka pary members say Parvanov has been systematically disregarding his official duties, as stipulated by the Constitution, and has not reported to parliament on his work, media report.

Media have made unconfirmed reports about the involvement of Bulgarian companies in illegal trade with Iraq during Hussein’s rule.

Parvanov’s supporters say the attack is part of a wider attempt by GERB to discredit the President, after the former leader of the Socialist Party criticised the government and called the current prime minister authoritarian.

“This is a campaign against the president, plotted by the GERB in return of Parvanov’s criticism of the government,” said the leader of the Socialist Party Sergei Stanishev.