The ruling party’s Kurdish initiative heats up Parliament as the debate comes packed with plenty of criticism of the Justice and Development Party’s efforts and what many opposition leaders are calling intentionally bad timing. Tuesday was also the anniversary of the death of Mustafa Kemal Atatürk, the founder of modern Turkey

The anniversary of the death of the founder of modern Turkey turned into a heated debate Tuesday as the ruling party attempted to discuss in Parliament its Kurdish initiative to end the 25-year terror problem.

The ruling Justice and Development Party, or AKP, last week submitted a motion to Parliament requesting a discussion of its Kurdish initiative with opposition parties in Parliament on Tuesday. The date, Nov. 10, was the 71st anniversary of the death of Mustafa Kemal Atatürk, the founder of the Turkish Republic.

Amid this opposition, the AKP brought the issue to Parliament on Tuesday for discussion. The Republican People’s Party, or CHP, and the Nationalist Movement Party, or MHP, submitted a motion to Parliament asking for the Kurdish move to be discussed another day and tension inside the hall started to grow.

Before the session, CHP leader Deniz Baykal held his party’s parliamentary group meeting and harshly criticized the AKP’s insistence on the Nov. 10 date, as well as the Kurdish initiative in general.

“We are witness to the first time in Turkish history that a plot is being staged and implemented by the ruling government against the accomplishments of the Republic. They are staging this plot in the name of developing democracy,” Baykal said, adding that the AKP’s inability to accept secularism has led to a constitutional conflict.

Emphasizing the importance of preserving the principles and values of the Republic, which is Atatürk’s legacy, Baykal said: “We shouldn’t let ambushes wear down the Republic. We should oppose the ethnic-oriented discriminatory efforts.”

Baykal also criticized the AKP’s insistence on discussing the Kurdish move on the anniversary of Atatürk’s death and said such a move implied a kind of veiled plot against the founder’s accomplishments. “I don’t know whether the Nov. 10 date is coincidental, but it is a kind of contempt against the Turkish nation to discuss the issue on such a date,” the CHP leader said. “We should not forget such initiatives if they are demonstrated in a challenging way.”

The opposition parties also offered harsh criticism against the Kurdish initiative and the AKP’s decision to hold the debate on Nov. 10 during the parliamentary session in which the initiative was discussed.

The CHP and MHP submitted a motion to Parliament asking for the Kurdish move to be discussed another day.

“It is not right for such an issue to be discussed on the anniversary of Atatürk’s death,” Şandır said. “The AKP insisted on this day and it is very unfortunate to bring the issue to Parliament on such a date when the flags are lowered to half-mast. Who are you challenging?”

AKP Kahramanmaraş deputy Avni Doğan criticized the opposition’s approach and his speech sparked tension in the parliamentary hall. “The AKP says it brought a project of democracy, peace and unity. Today is not a day for mourning. You [the opposition], however, say Atatürk didn’t die but lives in our hearts but also refuse to discuss the Kurdish initiative saying that today is a day for mourning,” Doğan said.

“Kemalism doesn’t mean a deadlock and it anticipates making the terrorists come from down from the mountains,” Doğan said as he accused the opposition parties of applauding the military coup plotters.

Taking the floor, Hakkı Süha Okay, the CHP’s parliamentary group deputy leader, also criticized the AKP’s decision to discuss the Kurdish move on Nov. 10. “You [the AKP] couldn’t make the terrorists come down from the mountains. You welcomed them with a state ceremony and you chose Nov. 10 on purpose. It is a challenge and taking revenge from Atatürk,” he said.

The tension escalated again once Interior Minister Beşir Atalay, the coordinator of the government’s Kurdish move, took the floor. Banners that read “Atatürk, we are following your path” and “The Republic is your legacy and it is we who will perpetuate it” were opened by CHP deputies.

Atalay’s remark that the AKP represented all of Turkey and that the opposition parties represented only regions drew reactions from CHP and MHP deputies. The CHP’s Kemal Kılıçdaroğlu stood up and demanded to take the floor, but Atalay’s speech was interrupted when CHP deputies unveiled their banners.

Parliament speaker Mehmet Ali Şahin warned the CHP and MHP deputies that Parliament was not a rally. He called on the opposition deputies to lower the banners. He then recessed the session for five minutes and then started the session.

Post Views: 243
Previous Georgia, Russia await next round of Geneva talks
Next Serbia To Hand Over EU Candidacy Request 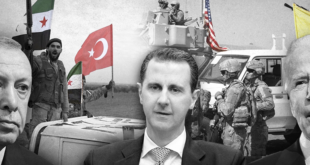