Nagorno-Karabakh must be resolved in old format: Russian FM 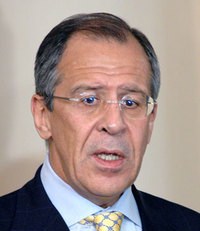 Conflicts addressed by the OSCE should be resolved in the previously agreed upon format, Russian Foreign Minister Sergey Lavrov said in response to a question during a news conference in Moscow today.

“These conflicts, such as Nagorno-Karabakh, Transdniester and Kosovo should be resolved in the previously adopted format,” he said. “Kazakhstan as the organization’s chairman will take a responsible approach to this problem.”

The conflict between the two South Caucasus countries began in 1988 when Armenia made territorial claims against Azerbaijan. Armenian armed forces have occupied 20 percent of Azerbaijan since 1992, including the Nagorno-Karabakh region and 7 surrounding districts. Azerbaijan and Armenia signed a ceasefire agreement in 1994. The co-chairs of the OSCE Minsk Group – Russia, France, and the U.S. – are currently holding the peace negotiations.