Organized crime in the Caucasus 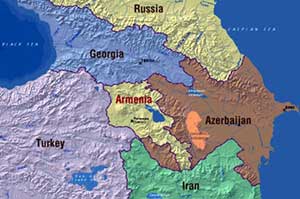 Caucasus is traditionally seen as the geographical bridge between Europe and the Middle East and it is one of the focal regions in modern day global politics due to its sensitive placement within the reach of some of the most volatile, yet energy rich peripheries of Eurasia.

Moreover it is a region, with a colorful history, which in recent times it has provided world headlines, as the case of the war in Georgia in 2008 showed, or the Nagorno-Karabakh conflict and the various ethnic conflicts in Dagestan, Ingushetia and other.

Organized crime activity is rife in the Caucasus and has become quite an issue due tot he internalization of the reach of the criminal networks based there, an issue that concerns European countries mostly.

The country according to numerous reports such as the annual State Department’s country files and the estimations by the Interpol and the United Nations is both a source and a destination country of women trafficking, and especially in relation to the states of Germany, Greece, Russia, Turkey, Italy and the United Arab Emirates.

Moreover the so-called Armenian mafia has established firm roots in California, Paris, Panama, Lebanon, mainly exploiting the presence of sizeable members of the Armenian communities in those regions. The main specialization is money laundering, loan sharking and weapons smuggling. Although the Armenian state has in various occasions disbanded domestic criminal networks, the main problem has yet to be addressed, due to the need for capital in this inland Caucasus country that is strongly inhibited for its progress because of the Nagorno-Karabakh issue that froze its relations with Azerbaitzan.

A sure predication for the near future is the organized crime activity will continue, providing a significant percentage of the country’s GDP, whilst it will remain interlinked with various interests mainly in the middle-to-top state apparatus of the country.

The oil and natural gas filled country of the Caspian, faces great difficulties in coping with a rising narcotics issue in its territory and there is significant presence of influential Turkish and Iranian crime groups. Moreover trafficking as well as illegal immigration are another two lucrative illegal sectors and there is a nexus between Istanbul and the United Arab Emirates in terms of money laundering and precious metals contraband.

The domestic Azeri groups have managed to form international networks in Vienna and the major German metropolises, while there are various indications that organized crime in that country has proved capable of entrapping notable figures of Baku and use them as “Protégés” in order to secure immunity for their unlawful actions.

Despite the Nargono Karabach issue, both Azeri and Armenian criminal groups cooperate in the illegal arms market sector, a phenomena that has its roots since the first war in 1993 when groups of these countries supplied weapons to the other side, even when the two countries were at war.

This Black Sea country, deals with a serious narcotics issue, and its territory is being used either as a transit or as a base locality by Chechen, Turkish and Azeri groups. Over the past few years there have been cases of heroin trafficking from Georgia to the Romanian port of Konstanja and the Bulgarian port of Burgas. The heroin shipment derived originally from Afghanistan and the international security authorities estimate that this is a secondary route towards the importation of heroin into Europe.

Arms and women trafficking are quite developed in Georgia and mainly under the control of local networks. The so-called Georgian mafia is influential in Russia, Israel, Turkey, Hungary and Ukraine. The main specialization is contraband of luxury items, tobacco smuggling, weapons trafficking and illegal gambling. Moreover there are many indications that certain Georgian groups are being used as “Hit -Squads” by other crime groups and perform assassinations or intimidation operations against competitors.

Although it cannot be estimated precisely, due to the lack of relevant research and statistics, it would be safe to assume, that the annual turnover of the organized crime activities in Caucasus, is by far the largest enterprise in those countries, bar the energy sector and it amounts into more than 10 billion Euros per annum.

Moreover, due to the interrelation between crime and politics, especially in a local level, the organized crime issue in Caucasus has wider political implications as well. For instance during the war in Georgia in 2008, the Russian state banned monetary transactions between the Georgians living in the Russian federation and the Georgia. As a consequence the crime groups in that country were eager for a swift end of the war although that didn’t seem at that time to be the official position of the Georgian government.

Despite the fact that the above may be a positive function of the link between crime and society, it is important to note around the existence of a societal influence of crime lords within their domestic political environment, that any neutral foreign observant should make a note of when assessing the reality in Caucasus.

Lastly, the current volatile international financial climate due to the ongoing crisis provides a further impetus for crime networks originating from Caucasus, to expand further in order to raise capital. In such a case, the European markets, with their affluent consumer markets for all kinds of illegal sectors, should be aware for an increase of crime activity, streaming from Caucasus, and of course this includes crime groups from other regions as well.

Already in countries such as Greece, Czech Republic, Italy and Turkey there has been a noticeable increase of the aforementioned, and there are various indications that organized crime activity, visible even to the ordinary citizen will make a remarkable presence over 2010, perhaps even further.