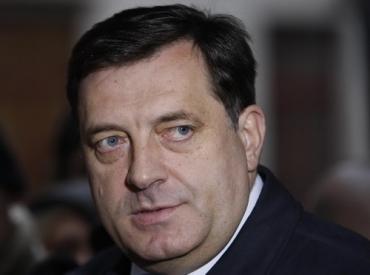 Dodik, who heads the government of the Serb entity, said after the meeting that solutions would not be imposed in Bosnia-Herzegovina and that Bosnian leaders would have to reach them themselves.

Steinberg was in Sarajevo for discussion on ways of solving the issues regarding the requirements for Bosnia’s Euro-Atlantic institutions.

Each representative of the political parties involved in the so-called Butmir Process gave their idea of the solution to the problems in separate meetings with the American official.

“The Dayton Agreement from 1995 is precisely the compromise solution, and only the provisions of the Constitution of Bosnia-Herzegovina which should be harmonized with the Convention on Human Rights should be amended,” RS prime minister said.

This situation would legalize “ethnic cleansing”, while “entity voting has become the right of some and is anti-Dayton as such,” the Muslim (Bosniak) political leader stated.

President of the Party of Democratic Action (SDA) Sulejman Tihić said that his party was in favor of agreements and compromises.

“SDA has to be responsible and realistic as opposed to those who are reject solutions out of hand,” Tihić pointed out.

Leader of Croat Democratic Alliance (HDZ) of Bosnia-Herzegovina Dragan Čović said after the meetings that negotiations about constitutional changes should continue, but that a clear strategy must exist.

He told reporters that Steinberg had clearly shown that the international community was not taking any responsibility and that it was the political leaders of Bosnia-Herzegovina that would be solely responsible for any failures.

President of the Croat Democratic Union 1990 Božo Ljubić stated that the delegation of the party had repeated its position about the two main principles which could make Bosnia-Herzegovina functional and stabile – strengthening of the state institutions and equality of the peoples.

He added that it would be a good idea to establish a permanent body made up of EU and U.S. representatives and those from Bosnia, which would continue the work on a new constitution, “because it is obvious that it would be a long process”.

The Butmir set of proposed reforms was previously rejected by a majority of Bosnia’s political parties, but EU and U.S. representatives ten days ago offered a revised document concerning the constitutional and political reforms.

The post-war Bosnia-Herzegovina is made up of the Serb and Muslim-Croat entities.