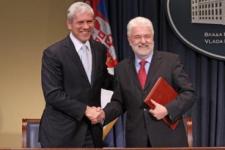 The decision came after Tadic and the country’s Prime Minister Mirko Cvetkovic signed a request on Saturday night, in the name of the government, for EU candidacy.

The Swedish Prime Minister and Minister of Foreign Affairs, Fredrik Reinfeld and Carl BIldt, have welcomed Serbia’s decision to submit their candidacy.

Bildt wrote on his official blog that “this is a historic moment for Serbia”.

Reinfeldt announced that Serbia had taken a historic step in deciding to apply for EU candidacy. “It will be my pleasure to receive Serbian President Boris Tadic to Stockholm on December 22, when he will be officially submitting the application,” Reinfeldt said.

The country’s path to candidacy was paved on December 7 when EU foreign ministers agreed to unblock Serbia’s interim trade agreement, which is part of Stabilisation and Association Agreement, SAA. Ratification of the SAA is expected to happen before summer.

The decision to apply for candidate status, supported by domestic public opinion, was made after serious analysis, Tadic said. He added: “Our program is simple, we want Serbia in the European Union with our identity.”

Cvetkovic explained that the decision to apply for candidacy was the result of strenuous work on the part of the government. “With this decision, Serbia has mapped out the route which it will take in the coming period and has shown that it shares the values of European countries,” Cvetkovic said.

Post Views: 174
Previous Macedonia will not be Blackmailed over Name, Says PM
Next Leaders of Georgian radical opposition travel to Kutaisi