Turkey says it can be EU’s growth engine

Turkey offers the EU more than just security, says the president on the eve of his UK visit and the EU minister adds: ‘Today’s Turkey is much better than yesterday’s.’

Turkish President Abdullah Gül said Turkey could offer the EU more than security assistance with its growing energy resources, population and dynamism, in an interview in Ankara with the British Sunday Telegraph newspaper released on Nov. 19. 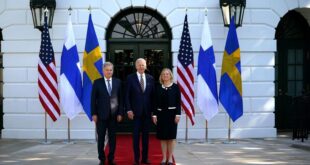